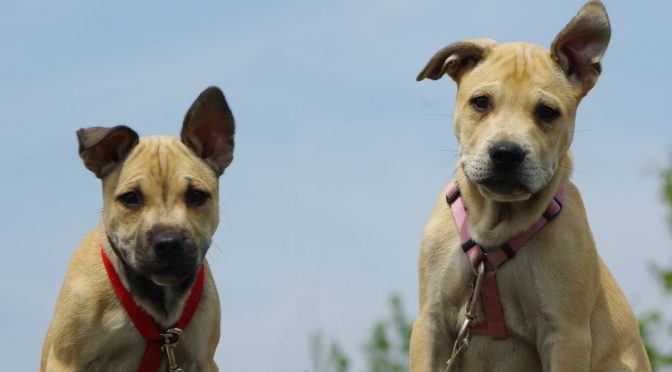 Why is Socialization Important for Puppies?

People, animals, and environments that a dog is not exposed to as a youngster will be unsettling for her as an adult. This is precisely why many adult dogs become reactive, aggressive, or fearful. Raising a puppy in a social/environmental vacuum is more often the cause of behavioural problems in an adult dog than is abuse or being attacked. Socialization is far more complicated than simply exposing a puppy to other dogs. Poorly executed attempts at socialization can be about as harmful as not trying at all!

Your pup might appreciate a bit of quiet time while she is getting her bearings in her new home. Keep in mind, though, that the critical window of socialization ends around 16 weeks of age and it is important for your pup to have as many good and varied experiences as possible before that. Time is of the essence! Even if your pup spends the first day in and around your home, she will be exposed (and socialized to) daily living experiences – this might include the sounds of pots and pans, the television or radio, the windshield wipers in the car on the way home, and voices and movement around her. Once she is settled she’ll be ready to meet with other new experiences, as outlined below. Sign up for a puppy socialization class that starts approximately 7-10 days after her first set of vaccinations. This socialization period cannot be “put on hold” – every day counts!

But what about vaccines!

Keeping a puppy confined until 16 weeks is as damaging to her mental health as exposing her to sick dogs is to her physical health. It’s important to find a balance between socialization needs that are unique to this young age, and physical safety.

Have a look at the below resources from leading experts:

To gain benefit from properly executed socialization, it is important that every new exposure is strictly GOOD. If a puppy is brought to a dog park and picked on by older dogs, the puppy is going to learn that dogs can be frightening. If a puppy is walked next to a roaring transport truck, the sound will terrify her. If a puppy is introduced to children who pick her up uncomfortably, she will learn that children are a source of discomfort and fear. For a puppy to grow into a comfortable, confident, and resilient adult dog, her formative years should be filled with great experiences.

Making good associations is the way to go to ensure that your pup is having good experiences. For example, if a puppy is afraid of a busy street, an owner may stand 30m away from the corner, where puppy notices but is not fearful, and feed a bit of cheese every time a car goes by. Puppy will become more curious to approach when she feels better about the noise and movement at a distance. This method is also a great proactive approach for pups who do not appear concerned at all! If they learn that every new experience is followed by something tasty, they will be more easily convinced that the world is a great place to be. A puppy shouldn’t be actively frightened at any point in this process.

Socialization with animals and people (social contact) is very important, but equally as important is socialization with environmental changes. This means that a pup should be helped to make positive associations with noises, objects, movement, and footing. Examples of noises could be fireworks, roaring trucks, yelling, hammering and sirens. Examples of objects could be fountains, overhangs on buildings, umbrellas, and statues. Examples of movement could be anything moving at a quick speed past them, such as traffic, bikes or the flapping of a flag. Examples of footing could be linoleum, sewer grates and open stairs. The list goes on!

“Look don’t touch” is also a critical life lesson for a well-adjusted adult dog. Allowing your pup to greet every single person and every single dog may lead to exceptional frustration when they are no longer allowed to bound into every social interaction. Find ample opportunity to stand at a distance and feed while your pup looks at people or dogs, and focus on walking past rather than sitting. Haphazardly greeting dogs on leash can lead to reactive behaviour (barking/lunging) as puppy grows into an adolescent.

Variety is the Spice of Life

A variety of experiences is important. A puppy who grows up with only greyhounds as companions may think a Bulldog quite strange or even frightening if she meets one later on in life. A pup raised with a family of one race and may find a person of another race to be concerning if introduced later in life. A pup who has had contact only with the other family dog will not generalize this comfort to other dogs she meets later in life. Being introduced to and enjoying contact with a large variety of people, dogs, other animals, and environmental factors is a critical aspect of successfully socializing a puppy.

Puppies are not “Blank Slates”

An eight-week-old puppy has already had a world of influence before being brought home by her adoring family. Genetics are a tremendous influence when it comes to how a pup will make sense of the world around her.

Conditions during pregnancy will impact a dog’s resistance to stress, as well. If a mother is stressed through her pregnancy, her pups will be less resilient to stressful situations than the pups of a mother who was not stressed. In the Handbook of Applied Dog Behavior and Training, Procedures and Protocols (ed. Steven R. Lindsay), he describes experiments on rats that demonstrated how “exposing gestating female rats to intense fear-eliciting stimulation resulted in unstable and emotionally-reactive offspring.”

A pup’s very early weeks – even before her ears and eyes open – will also impact her later in life. If she has no exposure to handling early on, she will be less tolerant of it later. Take a look at this video explaining US Military experiments on early neurological stimulation of puppies: http://www.youtube.com/watch?v=G31N_gmUkE0&feature=player_embedded

A breeder’s work is never done when it comes to setting their puppies up for success. A good breeder will safely expose the litter to as many safe experiences as possible during the two months or so that the pups are in their care. This includes handling and restraint, sound, social contact, changes in footing, etc. Puppy Culture is a fantastic resource for learning how the best breeders raise litters that grow into happy, stable adult dogs!

Properly executed socialization not only means keeping your pup mentally and emotionally safe by having great experiences with a large variety of social contacts and environmental stimuli, it also means keeping her physically safe. Do not enter a heavily dog-traveled area until your puppy is fully vaccinated. A dog park is no place for a young puppy at any point in her vaccinations. Not only is it a good place to teach her that other dogs can be unpredictable and potentially dangerous, it is also a good place for her to pick up parasites, bacteria or other illness. A puppy class is a much safer place for your pup. Arrange play dates with other puppies or adult dogs who are known to be in good health and who enjoy the company of puppies. Find that balance between keeping your pup safe and promoting the extensive socialization a dog will need to live comfortably in our hectic human-centric world.

Private Training and Virtual Group Classes are still available. Use the main menu to navigate options.

All in-person Group Class students are required to provide proof of complete COVID-19 Vaccination for themselves and anyone attending class with them.

Winter Weather Notice:
Be prepared to travel to class during winter driving conditions. Classes will be cancelled only in the most extreme circumstances. 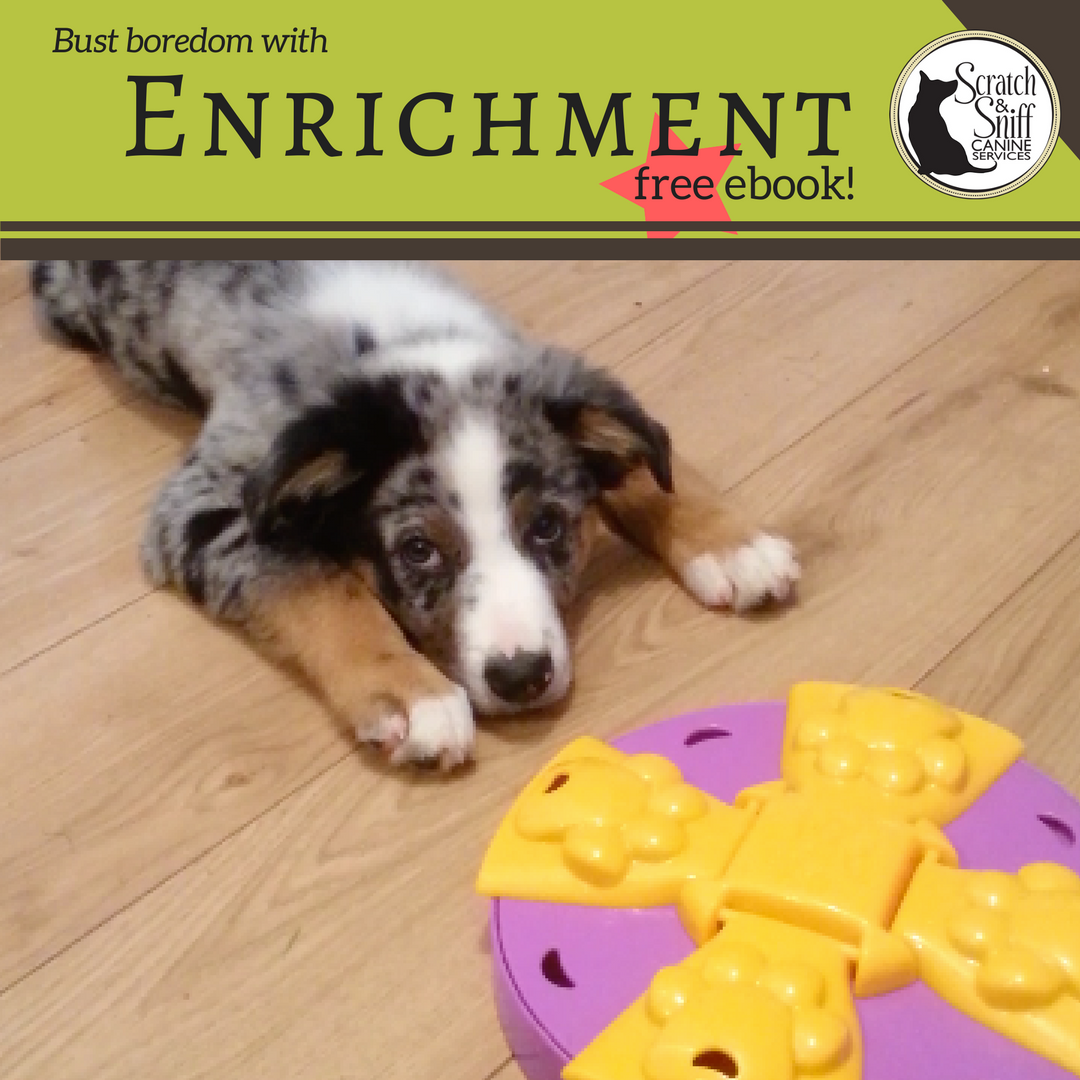