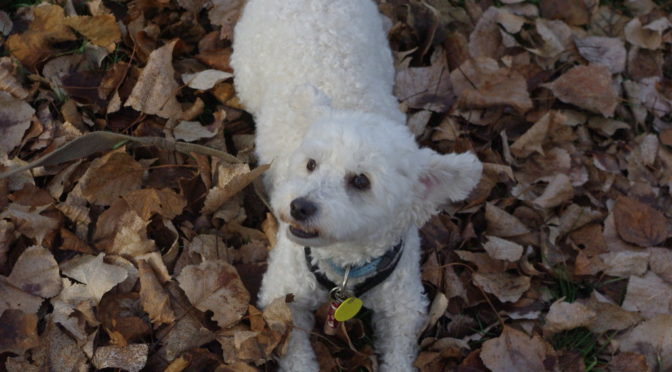 I’ve been volunteering with Speaking of Dogs rescue for the last ~2 years, and I couldn’t have hoped to fall in with a better organization! I started out as a foster home, and one of the biggest considerations in looking for a rescue was how my foster dog would be placed and what my input would be into that decision. Explicitly in this point is how the rescue places value on ethical training.  What I found in Speaking of Dogs is a rescue organization that has ethical and practical considerations that are very much comparable to my own. I use the term ‘ethics’ very deliberately here – using forceful methods to teach a dog something that can better be taught using force-free methods is not simply a matter of choice, it is a matter of ethical choice. Not only that, it may come down to being a matter of public and personal safety (see this study on confrontational training techniques and links to aggression).

My last foster was Elsie. At the time that I fostered (and kept) her, I also had my geriatric AussieX, Max. Three dogs in my apartment, including one high-maintenance geriatric and one new dog, was enough for the time being. By the time Max passed away last year, I had discovered that Elsie would tolerate no dog other than Arlo in the house. At that point, to save stress for all of us, I decided not to continue fostering.  Instead, I took a more active role in the rescue on the ‘paper’ side of things. I have written and laid out the Adoption Manuel and the Foster Manuel, worked seminars and events, do training consults, and do home visits and telephone interviews a-plenty.  Despite that I am no longer contributing to decisions of placements of my own foster dogs, through screenings and home visits I am contributing to decisions of placement of many other dogs in rescue. While I don’t have ‘final say’, I appreciate that my opinion is taken seriously regarding the suitability of potential adopters.

In many rescues, training and behaviour take a back seat to a warm bed and full belly, and the reason for this is often poor education at the organizational level. I recently completed a home visit for a rescue from out of town.  I met with the loveliest young couple, saw their well-kept condo, and at the end of the home visit briefly touched on training and behaviour. At this point, the couple told me that the rescue sent them information on “establishing your alpha status with your new rescue” and a recommendation to watch The Dog Whisperer.   I could have been stuck in an awkward spot here – they acknowledged that it was the rescue that sent them this information on coercive training. Had they been enthused about “being the pack leader” I would have come back to the rescue with a bad report not only on these applicants, but by implication a commentary on the rescue’s own beliefs about training and behaviour. That could be a tough spot. Luckily, the woman elaborated: “I’ve watched that Cesar guy, but he really leaves me feeling icky,” and with that, I offered other resources and recommendations on training schools and suggested to the rescue that they approve this couple for adoption.

I will never approve an adopter whose inclination is toward forceful, coercive training techniques. I am fair and I intend to educate, but I do have a good idea of whether an applicant is heeding our discussion. I will not recommend approval of an applicant who smiles and nods through our discussion of behaviour and training. I have no doubt that there are those that slip through the cracks, and this most certainly hurts – they interview well, they have intentions of using force-free methods, and everything else checks out well. But, after acquiring the dog, they fall in with a bad trainer or take terrible advice from a fellow dog-park goer and end up fitting their dog in a prong or shock, alpha rolling, scruff shaking, pinning and choking their dog in the name of ‘training’.  Even if this training does not result in a dog who resorts to aggressive behaviours in self-defence (see link at the top), or results in a “behaviourally lobotomized” dog (in the words of a colleague),  even if an owner has the best of intentions the dog is still being subjected to chronic stress and physical harm.

While the necessities of placement should include vet care, financial commitment, proper housing and emotional attachment, training and behaviour should not be a back-burner issue. Training and behaviour knowledge can make or break a dog and its family – I know this first hand and I’ve seen this in action with many other people.  “Traditional training”, that pervasive heavy-handed training we see on TV, places a dog’s cutoff signals into a framework of ‘submission’ (i.e. low posture, stillness, averted gaze, etc.), and promotes the suppression of confrontational stress signals (i.e. growls) that are placed in a framework of ‘dominance’.  The result is the silencing of protracted warning signals and a chronically stressed dog who is always a step closer to its threshold for reactivity/bites than it might otherwise be.

What is the best way to get a dog returned to rescue? I would say setting up an adversarial relationship between dog and owner from the get-go is a pretty good way to go about doing just that, whether this is because a rescue actively promotes coercive training or because it turns the other cheek and adopts dogs to applicants already occupying that mindset. Lack of emotional connection is a major factor in owner surrender. If an owner doesn’t have a strong relationship with an animal they will be far less likely to attempt to work through a behavioural issue (which may even be of their own creation!). How can a person have a good relationship with an animal who they perceive wants to ‘control the whole world’? (That is, in fact, quote from a recent telephone interview)

At a seminar earlier this year, the speaker stepped up onto her soap box for a rant on how rescues should lower their adoption standards, that good homes are being turned away, that there are shelter dogs being euthanized as others sit stagnant in rescue… That may be in part true, but what of the video she showed that afternoon? A dog adopted to an older couple would hide under the table until the grandkids got close, then it would leap out and grab a hold of their legs, if I recall, leaving multiple punctures. Her comment on that? “The rescue should have screened better, these people should never have been approved for this dog.”

I don’t want to see a dog returned to rescue because I supported a poor choice of applicant. I also don’t want to see one of these dogs out on the street being reefed around on a martingale collar, pinned on its back, or shocked about the neck. This is not a life to which I would knowingly subject any dog, especially when I have the ability to put a stop to it – if even only for the dogs I am screening.

Specialty Classes
AGILITY (And Then Some!): LEVEL ONE
Starting Sept 28

AGILITY (And Then Some!): LEVEL TWO
Starting Sept 28